Maria Montessori was a doctor by profession. Several years ago, a well known physician established in Italy a School of Scientific Pedagogy, the subject of which was to prepare teachers to follow the new movement which had begun to be felt in the pedagogical world. Due to the vast interest the hope was that it might be possible to establish, through the experiments carried on there, ‘the science of forming man.’

For several years they worked on the idea of the instruction and education of man. In order to establish natural, rational methods, it was essential that we make numerous, right and rational observations of manas an individual, initially during infancy which is the age at which the foundations of education and culture must be laid.

In the gathering of new Psychological Data, in the form of exact observations, the army of new scientific teachers was formed. It became a movement of the times. In France, in England, and especially in the USA experiments have been made in the elementary schools, based on the study of anthropology and psychological pedagogy, in the hope of finding the regeneration of the school.

The interesting fact is that it has rarely been the teachers who have carried on the research; the experiments have been, in most cases, in the hands of physicians who have taken more interest in their especial science than in education.

The truth is that the practical progress of the school demands a genuine fusion of these modern tendencies, in practice and thought; such a fusion as shall bring scientists directly into the important field of the school and at the same time raise teachers from the inferior intellectual level to which they are limited today.

This is the spirit of the men of science, to whom nature freely reveals her secrets, crowning their labors with the glory of discovery. It awakes in the mind and heart of the educator an interest in natural phenomena to such an extent that, loving nature, he shall understand the anxious and expectant attitude of one who has prepared an experiment and who awaits a revelation from it.

The instruments are like the alphabet, and we must know how to manage them if we are to read nature; but as the book, which contains the revelation of the greatest thoughts of an author, uses in the alphabet the means of composing the external symbols or words, so nature, through the mechanism of the experiment, gives us an infinite series of revelations, unfolding for us her secrets. 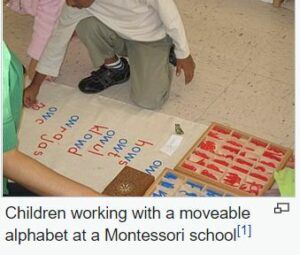 The child who has mastered the spelling-book gives the impression of knowing how to read. He does read the signs over the shop doors, the names of newspapers, and every word that comes under his eyes.

Imagine the scientist who goes to the woods early morning and watches the early activities of some family of insects in which they are interested, may be tired and sleepy with walking, full of watchfulness, who is not aware that he is muddy or dusty, that the mist wets him, or the sun burns him; but is intent only upon not revealing in the least degree his presence, in order that the insects may, hour after hour, carry on peacefully those natural functions which he wishes to observe.

That is the spirit of the men of science, to whom nature freely reveals her secrets, crowning their labors with the glory of discovery. Our true Montessori teachers are worshippers and interpreters of the spirit of nature.

The school must permit the free natural manifestations of the child if in the school scientific pedagogy is to be born. 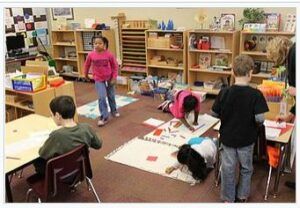 The Montessori environments offer the pure sense of freedom and choice to the child. The classrooms exhibit the spirit of self-discipline due to the right of meaningful choice for the children.

Your comments and suggestions are welcome!